skip to main | skip to sidebar

Animal of the Week: Bears 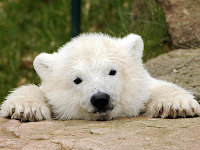 Bears capture the imagination of kids everywhere. Many of us have loved bears since we were little and were carrying a stuffed one around with us. Mine was called Theodora and she looked like she was a basic brown bear.
I believe that one of the reasons we love bears so much is that they are like us in many ways.
Bears are mammals – just like people

Bears are omnivores – they eat meat and plants – just like people

Bears care for their young into adulthood - just like people.

Here are some other interesting facts about bears:

There are eight different species of bears. They are Asiatic, Black, Brown, Polar, Panda, Sloth, Spectacled and Sun.

Bears live everywhere in the world except Antarctica and Australia.

Messy Fingers is a science program for preschoolers. The lessons are based on the Massachusetts Curriculum Frameworks for Preschool and are designed to be used at home with your child.

Have fun, explore, and get messy!