skip to main | skip to sidebar

Ants and a Giveaway!

Today at Messy Fingers we checked out ants and made some predictions about what we thought ants would   be attracted to. 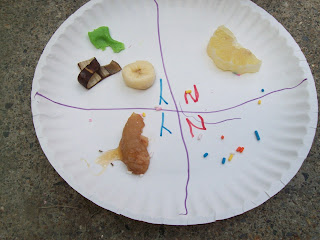 We put two things (more or less!) on the plate that we thought ants would be attracted to and marked that with a blue "y" and things that wouldn't be yummy to ants we marked with a red "n." You can see two little black specs about 7 o'clock on the plate above. C picked apple pie filling, banana, and candy as things that an ant would like to eat. She was completely correct about the pie filling. 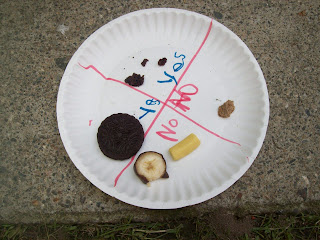 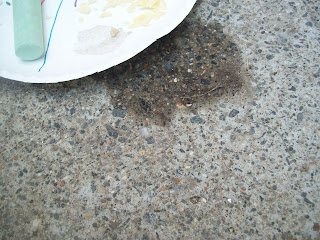 This was soda and a few ants came to investigate the puddle it made on the ground beneath the plate. 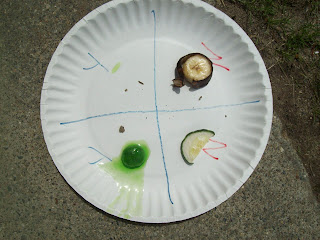 Now some folks say that cucumber peels and limes are ways to repel ants. Unfortunately, we really didn't have ants visiting many of the plates despite being in close proximity to many ant hills. I saw at least three different species of ant walking between the plates but most of the plates went unvisited by ants even after three hours of exposure. 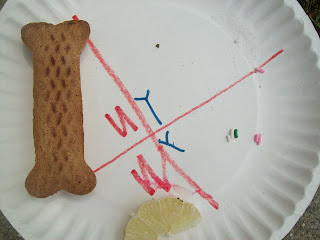 You can see some of the things the kids thought might or might not attract ants. They were very interesting and thoughtful predictions. 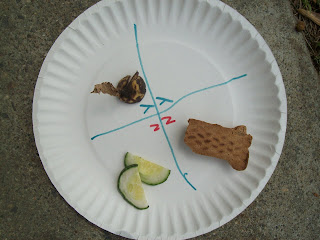 This scientist below brought chips from a picnic and the blob about five o'clock is chocolate syrup. Silly ants, why aren't they all visiting! 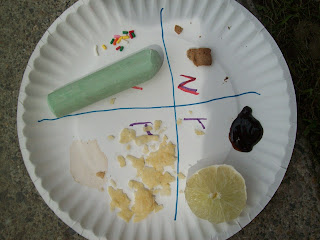 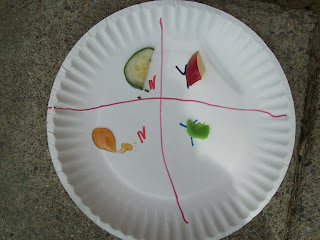 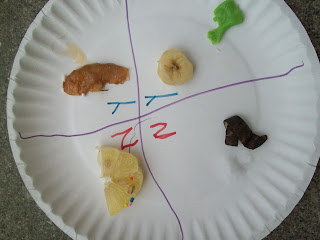 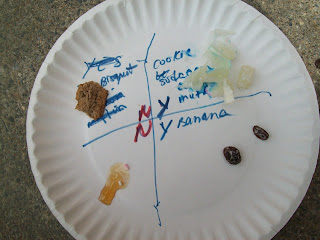 While this experiment wasn't as successful as we'd hoped, we've done plenty of other experiments that have produced more revealing results.

Now for some new fun.  I am offering a basket of planting tools and seeds along with some books to a randomly drawn name from the comments to THIS post. One entry for commenting on a favorite Messy Fingers topic or experiment. You can get a second entry to the Giveaway by following this blog - just mention that in a second comment.

Posted by Michele at 7:10 PM No comments: 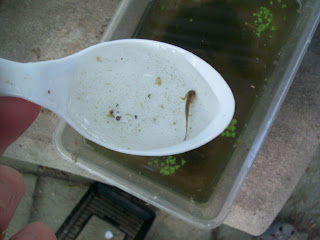 Learning about metamorphosis, or change, is such a rite of spring that many school children have done the whole tadpole thing four or five times by the end of third grade. Tadpoles are pretty sturdy and easy to acquire so teachers are assured that things will proceed in a predictable manner. Jumping on that bandwagon, I planned to do tadpoles with the preschoolers at Messy Fingers in April. Eggs, tadpoles, frogs seemed like a nice logical way to celebrate spring science.

So I expected my eggs,  collected in our pond just like the previous six springs, to proceed in a standard sort of fashion turning into tadpoles and then getting legs... well you know the drill. But here is where science took over.

The eggs seemed be in a much smaller mass than usual so I was concerned that something bad was happening. And the mass was thicker feeling but that could have been the cold, I thought.

The eggs hatched right at Messy Fingers much to the excitement of the parents.  But the "tadpoles" didn't seem behave in the usual way. They were jumpier almost more fish like in their movements. A week later, it was very very clear what critters I had in my container. 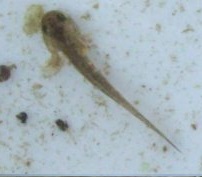 The external gills are a clear giveaway. Now this isn't entirely unexpected for two reasons. First every spring we hear wood frogs calling and they are an obligate species for vernal pools. Now that is a lot of big words and new ideas for one sentence. Vernal pools are ponds that are generally wet only in the spring so no fish live in them. This special wetland area is home to many unusual species that are obligate species, meaning they can only breed in a vernal pool.

And second, we found a baby spotted salamander in our back yard two years ago. They don't travel far from their birthplace and are also an obligate species. 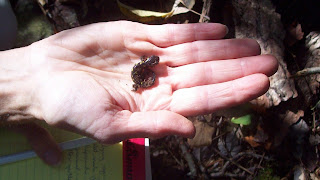 Check out this website from Maine on Vernal Pools. They have a great coloring page comparing frogs and salamander life cycles.

The babies are going to have to go back to the pond very soon. Salamanders use the chemistry of the pond to find it again when they are adults and will only lay eggs in the pond they hatched in. I've been very careful to only put water from that pond in their tank.
Posted by Michele at 5:56 AM No comments:

Not everyone can have a pet or may not have as many pets as they'd like. That is the case in our house. Our cats have decreed that fish are not pets, but dinner. Here are some fun ways to play with pets without getting one of your own!

Sorting: Sort out other groups of stuffed animals. There must be at least two members in each pile. How did you sort your animals?

Critter Clinic: Start a veterinary office. Your child can pretend to be a veterinary and give their stuffed toys a checkup. You can use a small clipboard to keep notes on how each pet is feeling.

Puppy Chow: You can make a fun snack called puppy chow. Take 1 bag of chocolate chips, 1 cup of peanut butter, and 2 tablespoons of butter and melt it in a microwave. Pour in a box of Chex cereal, stir until it is coated well. Finally add 1 bag of powdered sugar, put in zip lock bag and shake till everything is coated well. Now you have edible puppy chow!

Make your own pet: Grab a nicely shaped rock and make a pet rock. Add paint and googly eyes. Where does your pet live?  What does it need?

Field Trip: make a trip to the pet store and look at different pets. Most everyone is familiar with cats and dogs, but what about other pets? What do they eat?  What does a lizard eat? What do birds eat?  What about fish? Where do they live.?  Which animals like to play?  How do they do that?

Song: Sing Old MacDonald but use pets. What sounds do pets make?  Dogs and cats are easy, but what about a rabbit?  What sounds do lizards make?
Posted by Michele at 6:38 PM No comments: 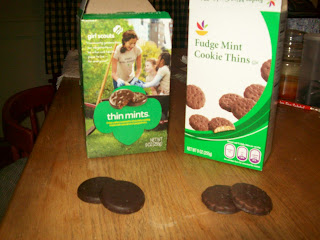 My husband found a Girl Scout cookie knock off at Stop and Shop this week. He picked up a box of his favorite just to see what they were like and me, well, being me, thought "Hmm, let's turn this into science!"

So we compared the cookies. The Girl Scout Thin Mints are on the left. They were much darker and thicker. The Stop and Shop cookies were crisper. 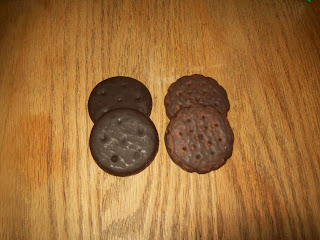 So we each predicted which cookie we thought we would like best. Then we closed our eyes and someone else fed us a cookie. We circled our prediction (we all thought that Girl Scout cookies would be our favorite).

The Stop and Shop cookies were very minty at first, but the minty didn't last long. The Girl Scout cookies had a minty flavor that lasted longer but wasn't as intense.

Then we decided which cookie we liked best. We marked that with a check. So we were each right in our prediction, we all prefered Girl Scout cookies. 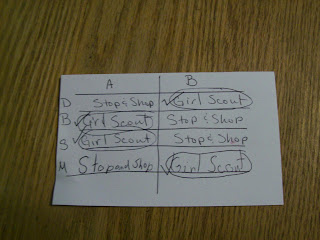 Animals of the week: Pets 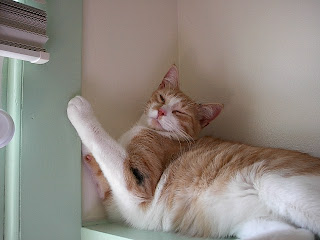 This is Dutch, one of my two cats. Most of the time Dutch acts more like a dog then a cat. Cats usually are more self contained then Dutch is. He greets us at the door, meows when he wants in or out of a room, and will fetch. His brother, Colby is more cat-like.

Pets has been a requested theme for Messy Fingers for a while, but I've been reluctant to do this. I've been reluctant for a few reasons, but primarily because they weren't part of the Massachusetts Curriculum Frameworks. So finding a balance has been a struggle. What sorts of preschool science can we do with pets?

Tomorrow will tell if I was successful, but I have a good feeling.
Posted by Michele at 7:04 PM No comments:

Messy Fingers is a science program for preschoolers. The lessons are based on the Massachusetts Curriculum Frameworks for Preschool and are designed to be used at home with your child.

Have fun, explore, and get messy!